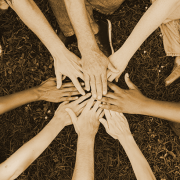 The Power of Youth in Our Politics

Go To Past Event
from The Power of Youth in Our Politics held on April 4, 2019

Gun violence. #BlackLivesMatter. Climate change. Voting rights. Despite a sense of alienation from civic engagement in today’s political atmosphere, young leaders continue to take up the charge across these and other critical issues, demanding a better future, wielding their votes and pushing the country forward to create change.

In his book Generation Citizen: The Power of Youth in Our Politics, Scott Warren, co-founder and CEO of Generation Citizen, recounts his personal political awakening and the long and inspiring history of young people enacting significant political change in the United States, ranging from the civil rights movement to the Parkland students’ stance against gun violence. Since its founding in 2010 when Warren was a senior at Brown University, Generation Citizen has worked with more than 50,000 students across the country to engage them in politics as the next generation of future leaders through an innovative curriculum and hands-on opportunities to dig into the civic process, creating new channels for learning and capacity building to make a difference locally and nationally.

Join Warren at INFORUM, alongside other rising voices in youth leadership and civic engagement, for an inspiring conversation about the political potential of youth and students and the future of American social change.

In association with YR Media, a national network of young journalists and artists