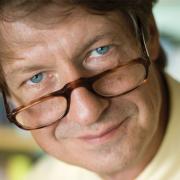 P.J. O'Rourke says no comedian could have written the joke that the recent election cycle has been. As celebrated political satirist, journalist, and diehard Republican O’Rourke put it in his endorsement of Democratic candidate Hillary Clinton, “America is experiencing the most severe outbreak of mass psychosis since the Salem witch trials of 1692.” Come hear O'Rourke's uniquely humorous take on the election, on Donald Trump (whom he calls "Landlord of the Flies") and on America in 2017.

P.J. O’Rourke
H.L. Mencken Research Fellow, Cato Institute; Author, How the Hell Did This Happen?: The Election of 2016; Twitter @pjorourke