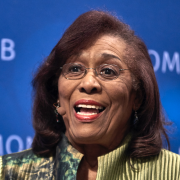 The Penalty for Success: My Father Was Lynched in Alabama

Go To Past Event
from The Penalty for Success: My Father Was Lynched in Alabama held on April 8, 2019

Monday Night Philosophy investigates the painful reality that succeeding in business is not always an advantage in America. In fact, if you were black in the Jim Crow South, it could get you killed. Elmore Bolling, a successful entrepreneur, was lynched in Lowndes County, Alabama in 1947 when his youngest daughter, Josephine Bolling McCall, was five years old. Over 70 years later, Bolling is now honored in the National Memorial for Peace and Justice, which opened in Montgomery last year. In her book, The Penalty for Success, McCall tells the story of her father’s murder and the impact it had—and still has—on her family and her community. She offers a revealing narrative that challenges us to rethink the reality of life for both blacks and whites in the rural South during Jim Crow, where whites used lynching to destroy competition from black business owners as part of a pattern of racial violence that terrorized African-Americans for generations and has yet to be adequately addressed in America.

Josephine Bolling McCall
Author, The Penalty for Success: My Father Was Lynched in Lowndes County Alabama