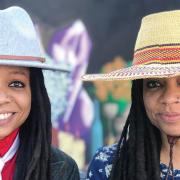 Go To Past Event
from The Opulence of Blackness: Melonie and Melorra Green Elevate Black Artists held on June 24, 2021

Since coming to San Francisco in 2000, twin sisters Melonie and Melorra Green have established themselves as leaders and mentors to countless Bay Area artists.

Melonie Green and Melorra Green are the co-executive directors of the African American Art & Culture Complex (AAACC) located in San Francisco’s Fillmore/Western Addition neighborhood. Born and raised in Memphis and with speech communication and theatre degrees from Tennessee State University, the twins moved to San Francisco in 2000 to study filmmaking at the Academy of Art University. During their first two decades in the San Francisco Bay Area as young Black queer women, they started their enormous artistic legacy, producing more than 80 exhibitions and 100 public events with their brand of collaboration, creativity, culture and community.

They have curated galleries, including the explosive exhibition “The Black Woman is God” at both the African American Art & Culture Complex and SOMArts Cultural Center, “Don’t Shoot: An Opus of the Opulence of Blackness” at MOAD, the AfroSolo “Black Matters” visual arts exhibition at the San Francisco Public Library, and the art in the District 5 Board of Supervisors office for eight years, including under the leadership of now-Mayor London Breed. They have mentored, assisted and influenced thousands of Bay Area artists through public programs and events such as the Fillmore Art Walk, San Francisco Independent Artists’ Week, their weekly radio show on KPOO 89.5 FM, and the 2020 street mural paintings of Black Lives Matter and Trans Lives Matter from Civic Center to the Castro. Under their leadership, AAACC was named Gucci Changemakers 2021, one of 15 organizations in the country. They continue to elevate their promise to inspire and empower Black people to tell their stories and uphold their truths.

Join us for a Pride Month talk with the 2021 San Francisco Pride Community Grand Marshalls about the power of art.

This program is generously underwritten by Gilead Sciences Inc.