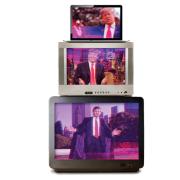 James Poniewozik joined The New York Times in 2015 after spending 16 years as a Time magazine columnist and television and media critic. At The Times, he has written about television as a reflection of changing culture and politics. In his new book, Poniewozik says that television has not only entertained us, but, with the election of Donald Trump, it has conquered America.

Poniewozik argues that television has morphed from the three-network era of the 20th century, which joined millions of Americans in a shared monoculture, into today’s zillion-channel, Internet-atomized universe, which has sliced and diced us into fractious, alienated subcultures. Against that background, he offers a portrait of Donald Trump as the chameleonic celebrity who courted fame, achieved a mind meld with the media beast, and rode it to ultimate power.

Come hear Poniewozik discuss his view that the age of Trump is a 24-hour TV production and that we live in an era where politics has become pop culture and vice versa.