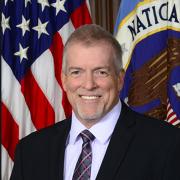 Go To Past Event
from NSA’s Jonathan Darby: Spies, Soldiers and Hackers: National Security Threats to the U.S. held on October 10, 2019

The National Security Agency (NSA) is both a member of the Defense Department and an Intelligence Community agency. NSA’s expertise is cryptology—making and breaking codes. The agency’s goal is to discover adversaries' secrets, protect U.S. secrets and outmaneuver adversaries in cyberspace, executing this mission while balancing the privacy rights of the American people.

Jonathan Darby has been with the agency since 1983, when he was initially assigned as a Russian language analyst. Darby has served in a variety of field and operations positions at NSA/CSS, including currently as the director of operations. Previously, he served as the signals intelligence directorate deputy director of analysis and production and the deputy chief of cybersecurity operations. Darby will characterize the security threats to our nation, our primary adversaries and their objectives. He will also talk about the role of NSA and what they are doing about these threats, providing some basic guidance for actions the public can take.

Join us for a rare public discussion with an individual at the forefront of America’s intelligence capabilities.