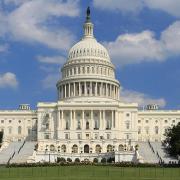 Go To Past Event
from The New Political Climate held on April 29, 2017

The 2014 Climate March in New York and other cities helped solidify public support in the run-up to the Paris climate accord the next year. But these days climate advocates are playing defense and trying to keep the Paris Agreement together. Will the Washington march have any impact on the politics related to climate change in the United States? Where can clean energy advance in the current political context?

Join Climate One as we go on the road for the People’s Climate Movement in Washington, D.C.