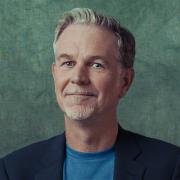 Go To Past Event
from Netflix’s Reed Hastings held on September 10, 2020

Since its founding in 1997, Netflix has revolutionized the way we discover and enjoy entertainment. Originally founded as a DVD-by-mail rental service in the United States, Netflix has reinvented itself from DVD rentals to internet streaming, from licensing old shows and films to self-producing them, and from U.S.-based to global—amassing more than 193 million subscribers in more than 190 countries. As the co-founder and co-CEO of Netflix, Reed Hastings led the effort to make Netflix the top player in internet entertainment. To achieve this, he developed a corporate philosophy and a set of management principles that rejected conventional wisdom, leading to a business culture that would make Netflix one of the most inventive companies in the world.

Hastings’ new book, No Rules Rules: Netflix and the Culture of Reinvention, chronicles how he built this radical management philosophy through decades of trial and error. His story is designed to be a useful resource for company leaders, entrepreneurs, founders and anyone looking to create a faster, more nimble and innovative workplace.

Join Hastings to learn more about what might be the most inventive company of its time.

Co-Founder and CEO, Netflix; Co-Author, No Rules Rules: Netflix and the Culture of Reinvention