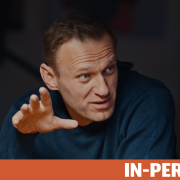 Go To Past Event
from 'Navalny' Documentary Film Screening and Discussion held on January 9, 2023

Russian opposition leader Alexei Navalny last reported in November that he had been placed in permanent solitary confinement in the Russian penal colony where he is serving an 11-year sentence.  This is just the latest attempt to silence the longtime anti-corruption activist and foe of Vladimir Putin.

Navalny was famously hospitalized in 2020 after being poisoned by a Russian-developed nerve agent. The gripping 2022 documentary Navalny chronicles his efforts to investigate his own poisoning . . . with shocking results. One of Navalny’s allies has called the film “life insurance” for the jailed opposition leader, since it is keeping him and his cause in the public consciousness.

Join us for a screening and discussion with the director of Navalny, which made the shortlist for the 2023 Academy Award for Best Documentary.