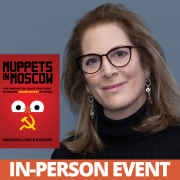 Go To Past Event
from Muppets in Moscow held on November 17, 2022

After the collapse of the Soviet Union, against a backdrop of massive cultural shifts, violence and political upheaval, Natasha Lance Rogoff took on the challenge of creating a program that had never existed before, Ulitsa Sezam, a Russian version of Sesame Street.  This new children’s television program, produced by a Russian-American team, was designed to introduce children into the world of learning in a very joyful way.

What started as an attempt to entertain and educate millions of children across the former U.S.S.R., encouraging tolerance and inclusion, spiraled into the astonishing true story of culture clashes shaping all aspects of production. On the set, the production team navigated conflicts about topics like diversity, class, and even the notion of encouraging children’s optimism about the future. Meanwhile, off the set, there were car bombings, assassinations of the show’s top broadcast partners, and hostile takeovers of the production studios.

Muppets in Moscow is as much about the work that went into the show and how rewarding it was to bring such a popular American program to the former U.S.S.R., as it is about navigating the Russian television landscape in the 1990s and stretching the limits of freedom of expression in a society unaccustomed to such freedoms.

While Ulitsa Sezam ended in 2007 along with many other independently produced programs shut down by Putin’s government, a generation of Russian children grew up watching it. The show’s history offers a valuable perspective of Russia and its people that remains relevant today. Join us as Natasha Lance Rogoff sheds light on the core values and beliefs that shaped Russia during this tumultuous period and the clashes that continue to play out today between Putin’s Russia and the West.