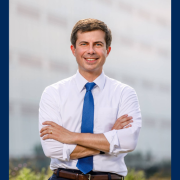 At 37 years old, Democratic presidential candidate Pete Buttigieg already has a few firsts under his belt. In 2011 and at the age of 29, he was elected mayor of South Bend, IN, making him the youngest mayor of a U.S. city with at least 100,000 residents, and the first openly gay municipal executive in Indiana. In December 2018, he announced his 2020 campaign for the presidency and is now the first millennial and the first openly gay presidential candidate. With fellow politicians like President Barack Obama touting him as the future of the Democratic Party, Buttigieg is seemingly in for an incredible year.

Join INFORUM for a conversation with the presidential hopeful, moderated by Mother Jones Editor-in-Chief Clara Jeffery, as they discuss Buttigieg’s quickly rising star, the importance of representation in American politics, and his desire to be the “fresh start” he feels our country needs.