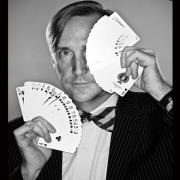 Go To Past Event
from Math, Magic and Surprise: Mathematician David Eisenbud in Conversation with Magician Mark Mitton held on April 10, 2018

Come for an enlightening and entertaining conversation between mathematician David Eisenbud and magician Mark Mitton about the relationship between technique and discovery, and surprise in math and magic. Everyone will learn math and magic tricks.

David Eisenbud is a professor of mathematics at the University of California, Berkeley, and director of the Mathematical Sciences Research Institute, an independent nonprofit that is a global center of collaborative mathematical research. He has served as president of the American Mathematical Society, and is a fellow of the American Academy of Arts and Sciences. Eisenbud’s interests outside of mathematics include theater, music and juggling (on which he co-authored a mathematical paper). He is a trained singer, and particularly enjoys performing classical art songs.

Mark Mitton performs and produces events all over the world. He has performed magic for business leaders, star athletes, Nobel prize-winning scientists, royalty and rock stars, economic migrants on the island of Lesbos and hospitalized children around New York City. Inspired by Martin Gardner, Mitton believes that the surprises of physical misdirection and comedy can teach us about the surprises in biology, psychology, philosophy and even mathematics.

In association with the Mathematical Sciences Research Institute

In conversation with David Eisenbud