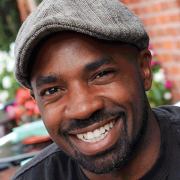 Chris Wilson offers a fresh perspective on our criminal justice system, on crucial issues of mass incarceration and on the importance of second chances. Growing up in Washington, D.C., Wilson was surrounded by violence and despair. He feared for his life as his family was shattered by trauma, his neighborhood was beset by drugs and his friends died one by one. One night when he was 17, Wilson was cornered by two men. He shot one of them, killing him. A year later, at 18, he was sentenced to life in prison with no hope of parole. Wilson writes, “I just got on this planet. I don’t even have a mustache yet. And my life is over.”

But his life wasn’t over. Behind bars, Wilson began reading, working out and learning languages. He even started a business. He wrote a list of things he intended to accomplish. He called it his master plan. He revised it regularly and followed it religiously. And, in his 30s, Wilson did the impossible: He convinced a judge to reduce his sentence. Six years later, he came out of jail determined to teach others about the selflessness, work ethic and professional skills that led to his second chance.

Chris Wilson
Owner and Founder, Barclay Investment Corporation and the House of DaVinci; Author, The Master Plan (with Bret Witter)