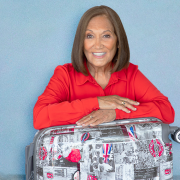 Maryles Casto: My Journey from the Clouds to Silicon Valley CEO

Go To Past Event
from Maryles Casto: My Journey from the Clouds to Silicon Valley CEO held on November 15, 2021

In her new book, A Hole in the Clouds, Maryles Casto shares how, as part of the dramatic economic growth of Silicon Valley, she built her travel business from a $1,500 startup to a $200 million company, serving the needs of the tech industry. She describes how advice from key industry pioneers—such as Intel’s Andy Grove and Robert Noyce and V.C.s William Bowes and Irwin Federman—contributed to her perspective on business, and offers invaluable lessons on her strategies that helped the business to thrive despite being in an industry threatened by extinction. She describes how her business success then led her to champion community and cultural organizations.

When Maryles Casto left her family’s sugar plantation in the Philippines in 1959 and moved to the United States as a new bride, she brought with her a love for travel and the stellar customer-service experience she’d gained as a flight attendant for Philippine Airlines. She never imagined she’d be building a business from scratch in an unfamiliar country. But when her husband went back to school, she needed to find a job. She founded Casto Travel soon after, a company she ran for more than four decades.

Join us as Maryles Casto discusses the true story of how she transformed her life from unemployed flight attendant into the CEO of one of the most successful travel companies in the country, and of the many interesting characters she has met along the way!

Chairman and CEO, MVC Solutions; Author, A Hole in the Clouds: From Flight Attendant to Silicon Valley CEO