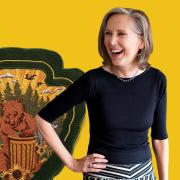 Go To Past Event
from Mary Roach's Fuzz: When Nature Breaks the Law held on September 21, 2021

Mary Roach wants to let us in on a secret: The greatest number of repeat criminal offenders are outside, all around us, and you’ve probably even seen some today—animals. It has only been three centuries since animals had to stand trial for their misconduct, in a court of law, with legal representation. Yes, really.

In her newest book, Fuzz: When Nature Breaks the Law, the science enthusiast turned writer deep-dives into human-animal conflict. As human land consumption creeps further into the natural habitats of these so-called troublemakers, it becomes more pressing to realize a symbiotic coexistence. The question becomes: Who is in the wrong, animals living according to their instincts or the humans that increasingly police them? To answer this question, Roach trots the globe from the Himalayas to Vatican City making friends with rats and foes with a macaque. Ultimately she reaches the conclusion that there is true, untamed hope for working with rather than against our critter counterparts.

At INFORUM Roach will regale us with stories as wild as they are true, such as her foray into rat-bait taste testing. Further she will serve as our safari-guide in the conversation of how to bring outdoor and indoor worlds together safely and justly at a time when this work is needed most. This conversation is moderated by Kara Platoni, Wired's science editor