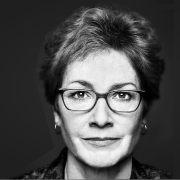 Go To Past Event
from Marie Yovanovitch: Former U.S. Ambassador to Ukraine held on March 28, 2022

With war-ravaged Ukraine in the headlines every day, it’s more important than ever to hear from those with firsthand experience and an understanding of the complexities of the battle being waged there.  Former U.S. ambassador to Ukraine Marie Yovanovitch not only served as U.S. ambassador to Kyiv from 2016–2019 but also has intimate family connections to the region as the child of survivors of the Nazi and Soviet regimes.

Yovanovitch is a diplomat and author with more than three decades of service in the State Department, having served as ambassador to Kyrgyzstan, Armenia and Ukraine, as well as senior advisor to the under secretary of state for political affairs. She is a diplomat in residence at Georgetown University’s Institute for the Study of Diplomacy and was a target of a 2019 smear campaign from supporters of the former president during the Trump-Ukraine controversy. She would go on to be a key witness during the public hearings of the ensuing impeachment trial. Her life is a testimony to the importance of transparency, accountability and integrity in government.

In her new memoir, Lessons From the Edge, Yovanovitch reclaims her own narrative and recounts her childhood, immigration to the United States and journey up the ranks of the State Department. Coming from a family that faced poverty, violence and totalitarianism, she warns of the dangers corruption and democratic backsliding pose to our free society.

Join us as Yovanovitch offers her perspective on the current situation unfolding in Ukraine, and tells her inspiring story of strength, bravery and honesty in the face of controversy, reminding us of how precious democracy really is.

This program is free thanks to generous supporters of The Commonwealth Club. We welcome any donations made during registration to support the production of our programming.

Copies of Lessons from the Edge are available for purchase at check-out (for shipment to U.S. domestic addresses only).

Former U.S. Ambassador to Ukraine; Author Lessons From the Edge: A Memoir

In Conversation with Olga Oliker