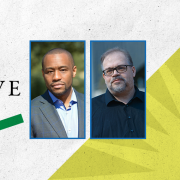 Go To Past Event
from Marc Lamont Hill and Mitchell Plitnick: The Limits of Progressive Politics held on February 24, 2021

American liberals find unity on domestic issues such as immigration, racial justice, gender equality, LGBTQ rights and other topics. When these issues are extended to other nations, however, unity is disrupted. In their new book Except for Palestine: The Limits of Progressive Politics, scholar and political commentator Marc Lamont Hill and Middle East expert Mitchell Plitnick explore liberal indifference to the Israel-Palestine conflict and its contributions to the rise of authoritarianism.

Except for Palestine argues that progressives and liberals must extend their core principles of equality and anti-exploitation to what they call the oppression of Palestinians. They say that U.S. policy has made peace hard to achieve in the Middle Eastern region, but Hill and Plitnick are strong believers that agreement is plausible if the political concerns of both Israelis and Palestinians are taken into account. Hill and Plitnick provide a timely proposal by examining multiple dimensions of the Israeli-Palestinian conversation, encouraging political leaders and citizens alike to align their beliefs and politics with their values.

Join us as Marc Lamont Hill and Mitchell Plitnick make a bold call for the American Left to align their beliefs and policies to all corners of the world.

In Conversation with Lara Bazelon
Professor of Law and Director of Criminal Juvenile Justice and Racial Justice Clinical Programs, University of San Francisco