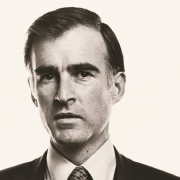 Man of Tomorrow: The Relentless Life of Jerry Brown

Go To Past Event
from Man of Tomorrow: The Relentless Life of Jerry Brown held on May 26, 2020

Governor Jerry Brown is no ordinary politician. Like California, he is eclectic, brilliant, unpredictable, and sometimes weird. Join us virtually as Newton explains how Jerry Brown extended, but still radically altered, the legacy of his father, Governor Pat Brown.

In his 16 years as governor (from 1975 to 1983 and from 2011 to 2019), Jerry Brown's blend of compassion, far-sightedness, and pragmatism helped restore the California economy, balance the state budget, combat climate change, and defend immigrants' rights. Newton reveals the blueprint of Jerry Brown's offbeat risk taking: equal parts fiscal conservatism and social progressivism. Newton also reveals other sides of Jerry Brown, whose defeat on the national stage did nothing to diminish the scale of his political, intellectual and spiritual ambitions, and whose legacy demonstrates how politics may once again be effective in the future.

This is a free program; please consider making a donation during registration to support our online programming

This is an online-only event; register to receive a link to the live stream