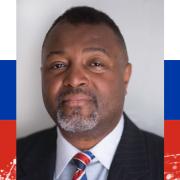 Go To Past Event
from Malcolm Nance: How Russia Is Destroying Democracy held on July 9, 2018

Retired intelligence officer Malcolm Nance knows about Vladimir Putin and the threat he poses to American sovereignty. From the ongoing investigation into Russian interference in our elections to Putin’s persistent presidency, Russia has a looming presence. Nance suggests this presence isn’t benign but part of a greater plan to break down western democracy.

His new book, The Plot to Destroy Democracy: How Putin’s Spies Are Winning Control of America and Dismantling the West, exposes how Russia has supported the campaigns of right-wing extremists throughout the United States and Europe. By seeking to create antidemocratic sentiment around the world, Nance argues Putin can leverage his strength to build a Russian-led alliance of nondemocratic autocracies. With the future of democracy hanging in the balance, Nance digs into the plans and goals of its enemies.

Join Nance for an important conversation about Russia’s plan to unseat democracy and learn what we can do about it.

Retired Intelligence Officer; Author, The Plot to Destroy Democracy: How Putin’s Spies Are Winning Control of America and Dismantling the West; Twitter @MalcolmNance