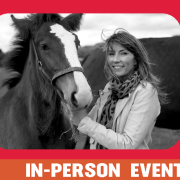 Lucy Cooke: The Queens of the Animal Kingdom

Go To Past Event
from Lucy Cooke: The Queens of the Animal Kingdom held on June 21, 2022

Since Darwin, evolutionary biology has been “all about the boys,” with the males of the species being the drivers of change and females simply passively devoted to them, zoologist Lucy Cooke argues. Rather than conforming with this male-dominated view of a male-dominated field, Cooke instead seeks to humorously reinvent the narrative—and show just how fierce, dangerous and hilarious the queens of the animal kingdom can be.

Lucy Cooke is a British zoologist and an author, director and television producer. She is a graduate of the University of Oxford, where she was tutored by Richard Dawkins. A trailblazer in the field of evolutionary biology, Cooke’s works have included multiple BBC films and documentaries and has published numerous books on various members of the animal kingdom.

In her latest book, Bitch: On the Female of the Species, Cooke gives a new look at the females of the species—from same-sex albatross couples raising chicks, to murderous mother meerkats and the titanic battle of the sexes waged by ducks. In her words, “This isn’t your grandfather’s evolutionary biology,” dispelling myths and showing just how ravishing the kingdom’s queens can be.

Join us live in San Francisco as Cooke breaks down the gender stereotypes of zoology, and provides striking accounts that prove females can be just as dynamic as any male.

Zoologist; Author, Bitch: On the Female of the Species; Twitter @mslucycooke