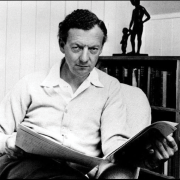 Love Has Made Them One: Exploring the Romance of Benjamin Britten and Peter Pears

Go To Past Event
from Love Has Made Them One: Exploring the Romance of Benjamin Britten and Peter Pears held on June 29, 2021

Composer Benjamin Britten, a central figure of 20th-century British music (Peter Grimes, The Turn of the Screw, Ceremony of Carols) and renowned tenor Peter Pears were together from 1939 until Britten’s death in 1976. During Britten’s lifetime, neither spoke publicly about their relationship or sexuality—homosexuality in England was illegal until its partial decriminalization in 1967.

San Francisco-born and -based arts educator, performer, composer and conductor Cole Thomason-Redus presents an illuminating 21st century perspective on their musical partnership and private life. Cole is educational content curator in the Department of Diversity, Equity & Community at San Francisco Opera, where he is host of the weekly online series "Opera Aficionado." Cole has also been director of education for Chanticleer, curator of classical music at Apple, Inc., and classical music analyst for the Music Genome Project at Pandora Media, Inc.