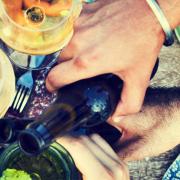 Go To Past Event
from Libation Migration: Beer, Wine and Climate Change held on October 15, 2019

America’s most popular alcoholic beverages are about to take a hit from climate. Mild, sunny growing conditions have made California king of a $62 billion wine industry—from Napa Valley’s prized cabernet sauvignon to the plumy pinot noirs of Sonoma County. And more than 7,000 breweries in the United States rely on barley, a key ingredient in beer that is partial to the cool temperatures of northwestern states and Canada.

But both grapes and barley are sensitive to a changing climate. And years of disruptions from drought, fires and rising temperatures have brewers and winemakers wondering: Will business as usual survive into the next generation?

Join us for a conversation with Esther Mobley, wine critic for the San Francisco Chronicle, and Dan Petroski, winemaker for Larkmead Vineyards; and Katie Wallace, director of social and environmental impact at New Belgium Brewing, on how climate is reshaping the wine and beer industries—and what that means for consumers and our wallets.