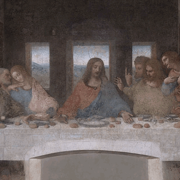 Go To Past Event
from Leonardo's Knots held on February 11, 2019

Monday Night Philosophy gets all tied up in the 500th anniversary of Leonardo da Vinci's death by asking: What do all of da Vinci's paintings have in common? Caroline Cocciardi answers that question by exploring da Vinci’s passion for knots and mathematics. She traces da Vinci’s evolution from traditional knots (aesthetically appealing and ornamental) to mathematical knots (patterns that tell a story within his art). Da Vinci’s combined expertise in art and mathematics gave him the unique ability to translate these minuscule, interlaced wonderments into the glorious visual beauty found in his masterpieces: Mona Lisa, La Bella Principessa, Annunciation, The Last Supper, Salvator Mundi, Portrait of Isabella d’Este, and Lady with an Ermine.

In association with the Leonardo Da Vinci Society and Humanities West