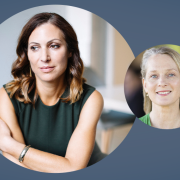 Go To Past Event
from Lara Bazelon with Piper Kerman: A Good Mother held on May 18, 2021

Two new mothers, a murder, and a question about crime: in her new thrilling debut novel A Good Mother, law professor Lara Bazelon examines the intricacies of motherhood, the legal system, and moral obligation. As a writer, attorney and mother herself, Lara Bazelon writes about crime, love, work and family with a voice that wonders what is right and fair for all.

When a soldier is found dead at a U.S. Army base, there is no doubt that his wife, Luz, is to blame. But was it an act of self-defense? An attempt to save her infant daughter? Or the cold-blooded murder of an innocent man? Public defender and new mother Abby strives to keep Luz out of prison, sympathizing with the struggles of parenthood. When new evidence emerges and the trial turns toward an outcome no one expects, Abby and Luz must answer the riveting question: What does it mean to be a good mother?

Join us as Lara Bazelon illustrates the answers to motherhood through a discussion of A Good Mother. She'll be joined in conversation by Piper Kerman, author of the hit bestseller Orange Is the New Black. Kerman's book served as the source material for the eponymous hit Netflix series.

In Conversation with Piper Kerman
Author, Orange Is the New Black: My Year in a Women's Prison