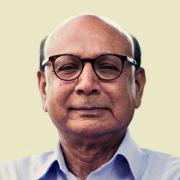 Go To Past Event
from Khizr Khan: Hope and Sacrifice held on December 5, 2017

One of the most memorable speeches from last year’s Democratic National Convention was given by Gold Star parent Khizr Khan. With his wife Ghazala by his side, Khan spoke about equality, sacrifice and the ideals symbolized by the U.S. Constitution. Khan’s son Humayun Khan, a U.S. Army captain, was killed in the line of duty in Iraq and posthumously awarded a Purple Heart and Bronze Star.

“Like many immigrants, we came to this country empty-handed,” Khan said. “We believed in American democracy—that with hard word and the goodness of this country, we could share in and contribute to its blessings.”

From his family’s move from Pakistan to becoming an American citizen, Khan shares his personal story of immigration, courage and patriotism.

Author, An American Family: A Memoir of Hope and Sacrifice