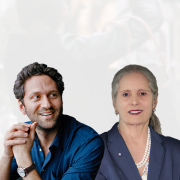 Kevin Adler and Dr. Gloria Duffy: Steps Everyone Can Take to End Homelessness

Go To Past Event
from Kevin Adler and Dr. Gloria Duffy: Steps Everyone Can Take to End Homelessness held on August 30, 2021

Inspired by his Uncle Mark, CEO Kevin Adler launched Miracle Messages in 2014. Growing up, Kevin watched his beloved and loyal uncle, who suffered from schizophrenia, battle homelessness on-and-off for 30 years. When Mark passed away at the age of 50, Kevin’s family ensured that Mark’s life would never be forgotten within their own family. However, Kevin realized that while his uncle was lucky to have a family to remember and support him, thousands of others living on the streets were not connected to their family members or friends.

Kevin and Miracle Messages volunteers offer homeless individuals a chance to reconnect with their family members and friends. Through Miracle Message’s reunion service, they have helped reunite over 425 people experiencing homelessness with support systems from which they have been separated, sometimes for decades. Dozens of reunions have resulted in individuals moving off the streets. Miracle Messages’ buddy system has also connected members of the homeless population with volunteers who offer companionship and support through calls and text messages.  They provide cell phones so homeless individuals can stay in touch, and are experimenting on a small scale with universal basic income for those who are homeless.

Our CEO, Dr. Gloria Duffy, will join Kevin for a conversation addressing how homelessness can be addressed on the individual and familial level. This topic is deeply personal for Gloria, as it is for Kevin, since a family member of hers has battled homelessness. Over the past 15 years, Gloria and her family have developed a system that supports her relative with a home and other basic needs.

Please join us as Kevin and Gloria reimagine how we fight homelessness, and learn how Miracle Messages has reunited hundreds of families.