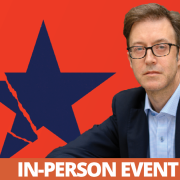 Kermit Roosevelt III: The Nation That Never Was

Go To Past Event
from Kermit Roosevelt III: The Nation That Never Was held on September 8, 2022

Is today’s America really the one the Founding Fathers envisioned? That is the question constitutional scholar Kermit Roosevelt asks, tracing the majority of American political sentiments from the modern day not back as far as the Revolution, but to the Reconstruction era.

Kermit Roosevelt is a law professor at the University of Pennsylvania and the great-great grandson of President Theodore Roosevelt. He is an expert in constitutional law, national security, conflicts of law and civil liberties. His work has been published in the Virginia Law Review, the Michigan Law Review, and the Columbia Law Review and he is the author of two historical novels examining themes of equality and civil liberty.

In his latest book, The Nation That Never Was: Reconstructing America’s Story, Roosevelt argues that America in the modern day is not the ideological descendant of the era of the Founding Fathers but that of Reconstruction and Abraham Lincoln. Examining the writings, history and political thought of America’s first century, he explains that many of the country’s core political beliefs, especially equality, originated in the Reconstruction era not as a return to the Founder’s vision but as a rejection of it.

Join us as Roosevelt rethinks how American history is viewed, and how the ideas underpinning the country have shifted in the past two centuries—and along with it, what it means to be American itself.

David Berger Professor for the Administration of Justice, University of Pennsylvania Carey Law School; Author, The Nation That Never Was: Reconstructing America’s Story

In Conversation with David Spencer

Founder, SenSpa; Member, Commonwealth Club of California Board of Governors