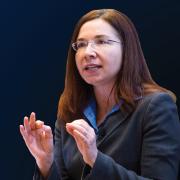 Katharine Hayhoe: Why We Need to Talk About Climate Change

Go To Past Event
from Katharine Hayhoe: Why We Need to Talk About Climate Change held on January 22, 2019

Join us in presenting Katharine Hayhoe with the eighth annual Stephen Schneider award. Established in honor of Stephen Henry Schneider, one of the founding fathers of climatology who died suddenly in 2010, the $15,000 award recognizes a natural or social scientist who has made extraordinary scientific contributions and communicated that knowledge to a broad public in a clear and compelling fashion.

“For many years, Katharine Hayhoe has been a unique voice in the climate communication world. With her patience, her empathy and her abiding Christian faith, she has been able to reach audiences that other climate scientists have not been able to reach,” says juror Naomi Oreskes, professor of the history of science at Harvard University.

Hayhoe will be joined by fellow scientist Noah Diffenbaugh, professor and senior fellow at the Woods Institute for the Environment at Stanford University. They will be in conversation on communicating climate change in a transparent, engaging and accessible manner.