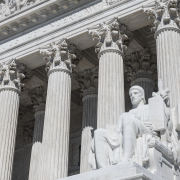 Kate Kendell and 'Pack the Courts'

This week, attorney Kate Kendell talks about her work with Pack the Courts, a new organization aimed at doing exactly what its name says—add additional justices to the U.S. Supreme Court to counter the court's current conservative majority.

Is it a good idea? Is it fair? Does it set a good or bad precedent for future political movements in the country? Join us for a discussion of the organization and the movement.

Until the end of 2018, Kendell led the National Center for Lesbian Rights, a national legal organization committed to advancing the civil and human rights of lesbian, gay, bisexual and transgender people and their families through litigation, public policy advocacy, and public education. She also serves as co-chair of OutWOMEN, Out Leadership’s talent accelerator engaging and celebrating LGBT+ women in business.

Kendell grew up Mormon in Utah and received her J.D. degree from the University of Utah College of Law in 1988. After a few years as a corporate attorney she was named the first staff attorney for the American Civil Liberties Union of Utah. She is a nationally recognized spokesperson for LGBT rights and has an active voice in major media, including The New York Times, The Wall Street Journal, The Advocate, NPR, CNN and many others. Despite the national success of NCLR under her tenure, she says her most rewarding responsibilities still include fostering alliances on the community and organizational levels, and advocating from a grass-roots perspective on issues concerning social justice.

This program is part of our weekly series with Michelle Meow, who brings her long-running daily radio show to The Commonwealth Club one day each week. Meet fascinating—and often controversial—people discussing important issues of interest to the LGBTQ community, and have your questions ready.