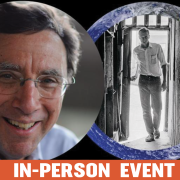 John Markoff: The Many Lives of Stewart Brand

Go To Past Event
from John Markoff: The Many Lives of Stewart Brand held on March 24, 2022

Iconic counterculture icon Stewart Brand has been at the center of many of the social and cultural movements launched and nurtured in the Bay Area. Whether it be early computing, the Merry Pranksters and the hippies, the generation-defining Whole Earth Catalog, or the environmental movement, Brand has been at the center of them all. Yet many outside these movements only know him because Apple founder Steve Jobs quoted Brand's famous mantra—stay hungry, stay foolish—in a famous Stanford University commencement speech. Legendary science and technology writer John Markoff hopes to elevate an understanding of Brand's impact on our world.

In his new book, Whole Earth: The Many Lives of Stewart Brand, Markoff provides the first serious biography of Brand, his impact and his many contradictions. A blond-haired WASP with a modest family inheritance, Brand went to Exeter and Stanford and was an army veteran, but in California in the 1960s he became an artist and a photographer in the thick of the LSD revolution. While tripping on acid on the roof of his building, he envisioned how valuable it would be for humans to see a photograph of the planet they shared from space, an image that in the end landed on the cover of his Whole Earth Catalog, the defining publication of the counterculture. He married a Native American woman and was committed to protecting indigenous culture, which connected to a broader environmentalist mission that has been a through line of his life. He also was early to the promise of the computer revolution—nurtured in the pages and community of the Whole Earth Catalog—and helped define it for the wider world.

Please join us as Markoff discusses Brand's influential and remarkable California life and the impact he has had on millions of people.