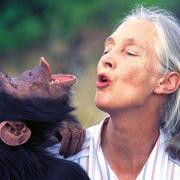 Jane Goodall in Conversation with Jeff Horowitz and Greg Dalton

Go To Past Event
from Jane Goodall in Conversation with Jeff Horowitz and Greg Dalton held on April 3, 2017

Perhaps the world’s most well-known advocate for the environment, Jane Goodall, DBE, founder of the Jane Goodall Institute and U.N. Messenger of Peace, has for much of her nearly six-decade-long career worked to raise awareness about the importance of protecting our planet. The Jane Goodall Institute (JGI) is a global, community conservation organization operating in more than 30 countries worldwide with a strong presence in Africa’s chimpanzee range. JGI’s approach to species conservation improves the lives of people, animals and the environment by honoring their interconnectedness. Goodall spends her time traveling around the world nearly 300 days a year, inspiring and mobilizing people with her twin messages of hope and action.

Jeff Horowitz is founder of Avoided Deforestation Partners, a global nonprofit network dedicated to healing the climate by protecting forests, which absorb carbon pollution. He is also a co-executive producer of "Years of Living Dangerously," a National Geographic television series focused on the risks and opportunities of global climate change. In 2014, Horowitz accepted an Emmy for season one of "Years of Living Dangerously." The series was founded by legendary producers James Cameron, Arnold Schwarzenegger and the late Jerry Weintraub.

Join us for a conversation about reasons for hope, thoughts about the connection between deforestation and climate change, and the threat to environmental protection coming from Washington, D.C.