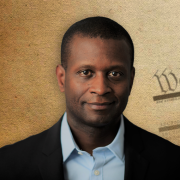 Go To Past Event
from Jamal Greene: How Rights Went Wrong in America held on March 31, 2021

America prides itself on freedom and guaranteed rights for all its citizens, but has the explosion of rights resulted in a partisan divide among its citizens?

You have the right to remain silent and the right to free speech. The right to worship, and to doubt. The right to be free from discrimination, and to hate. These rights were not written at the founding of our country, but rather an afterthought of our country’s founding fathers. It wasn't until the racial strife resulting from the Civil War and missteps by the Supreme Court that rights gained a great deal of controversy. This controversy has falsely led many Americans to believe that awarding rights to one group means denying rights to others.

Columbia professor and constitutional law expert Jamal Greene seeks to understand this phenomenon in his new book How Rights Went Wrong: Why Our Obsession with Rights Is Tearing America Apart. Greene says that in order to prevent society from complete division, we must recouple rights for all with justice for all.

Join us as Greene grounds us in the foundations of our country and envisions a future of equity and guaranteed rights for every American.