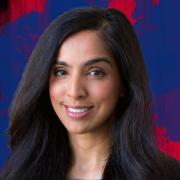 The Immigrant Experience with Aarti Shahani

Go To Past Event
from The Immigrant Experience with Aarti Shahani held on October 21, 2019

The American political discourse is constantly calibrating its interpretation of what it means to be American. Coming from an undocumented family herself, writer Aarti Shahani has spent her life navigating the shifting tides of anti-immigrant sentiment in the United States. Her book Here We Are: American Dreams, American Nightmares documents Shahani and her father’s disparate versions of the immigrant experience, coexisting as the scholarship kid at one of Manhattan’s most elite prep schools and the shopkeeper who mistakenly sells watches and calculators to the notorious Cali Cartel.

In addition to being an author, Shahani is an award-winning correspondent for NPR in Silicon Valley, covering the largest companies on Earth. Shahani remains a resounding voice advocating on behalf of our country’s immigrant community. INFORUM hosts Aarti Shahani to address a question that plagues immigrants and natives alike: Who really belongs in America?

In association with American India Foundation