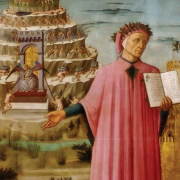 Many nations have a national poet, whose poetry helps carve out their own unique cultural niche in human civilization. Italy has enjoyed many literary geniuses for over two millennia, but still looks to one man the most: Dante. Like major poets in other cultures, Dante’s influence on the Italian language can hardly be overstated. The Divine Comedy was the first major work of literature to leave Latin behind in favor of Italian, and it remains the world standard of poetic excellence. Dante’s fertile imagination also inspired artists, writers and theologians, making him almost as influential about the afterlife as he is linguistically.

Join Humanities West in person at The Commonwealth Club, or via livestream, to celebrate the 700th Anniversary of Dante’s death—which ironically occurred not that many months after he completed his speculations about post-death possibilities—with a two-hour, three-lecture Dante feast: