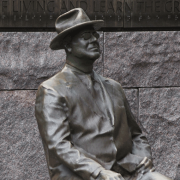 Go To Past Event
from How Public Policy Became War held on August 12, 2019

FDR's New Deal is widely recognized as a turning point in American history, but David Davenport and Gordon Lloyd go even further, calling it “America’s French Revolution.” Refashioning American government and public policy in ways that have grown to epic proportions today, Roosevelt’s decisions reset the balance of power away from Congress and the states toward a strong executive branch. They also shifted the federal government away from the founders’ vision of deliberation and moderation toward war and action.

Having learned that a sense of crisis is helpful in moving forward a domestic agenda, post New Deal presidents have seized on the language of war to extend their power dramatically. They have declared war on everything from poverty and drugs to crime and terror. Exploring the consequences of these ill-defined (and never-ending) wars, Davenport calls for a reexamination of this destructive approach to governance and a return to more deliberative and moderate methods.