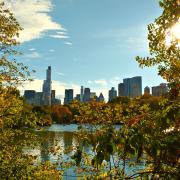 How Cities Can Solve the Climate Challenge

Go To Past Event
from How Cities Can Solve the Climate Challenge held on May 4, 2017

Mayors around the country are bypassing national politics and working around federal restrictions to both clean up their cities and foster growth in renewable energy. In red and blue states, local leaders are solving traffic congestion, promoting smart growth, and preparing for the impacts climate disruption will have on public health, roads and other infrastructure. Cities are a good news climate story; most reductions in carbon pollution actually happen at the city and regional level.

Carl Pope teamed with former New York Mayor Michael Bloomberg to write a book about how cities are cleaning up their regional economies. Join us for a conversation with an environmental legend and Bay Area leaders who are advancing sustainable communities despite enthusiasm for the brown economy in Washington, D.C.

Co-Author (with Michael Bloomberg), Climate of Hope: How Cities, Businesses, and Citizens Can Save the Planet; Former Executive Director, Sierra Club

Co-Founder and Executive Director, Chambers for Innovation and Clean Energy