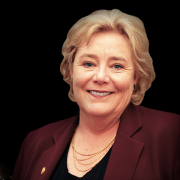 Go To Past Event
from House Select Committee Member Zoe Lofgren: A Conversation About the January 6 Attack held on August 4, 2021

Join an important discussion with this veteran congresswoman about her role on the House Select Committee to Investigate the January 6th Attack and its potential impact, as well as the state of the country and our democracy, the possibilities for bipartisan legislation, and how to handle such crucial issues as the pandemic variants, the economy, gun violence and immigration.

Zoe Lofgren has been a Democratic member of the U.S. House of Representatives since 1995, representing the 19th District of California, encompassing San Jose and the Santa Clara Valley. She currently serves on the House Judiciary Committee, and the House Science, Space and Technology Committee and is a former law professor.

Representative Lofgren has most recently been appointed to the House Select Committee to Investigate the January 6th Attack on the U.S. Capitol and has said her goal is to "uncover the truth, protect our democracy, and ensure that such an attack will never happen again.”