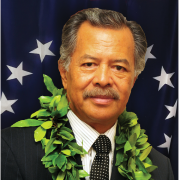 Go To Past Event
from Henry Puna, Prime Minister, The Cook Islands held on January 8, 2020

The Cook Islands is a 15-island nation in the South Pacific, with political links to New Zealand. The islands were first settled around A.D. 1000 by Polynesian people who are thought to have migrated from Tahiti. Prime Minister Henry Puna assumed office in 2010 and previously served as secretary of the Ministry of Tourism and Transport.

Prime Minister Puna has led the establishment of the world's largest multipurpose marine reserve, Marae Moana, hailed as a major step forward for marine conservation. Additionally, on January 1, the Cook Islands will become the first South Pacific island nation to officially achieve developed nation status. It was under Prime Minister Puna's premiership that the Cook Islands became, in November 2011, a founding member of the Polynesian Leaders Group, a regional grouping intended to cooperate on a variety of issues, including culture and language, education, responses to climate change, and trade and investment.

Come for a rare behind-the-scenes look at this island nation.

Notes: In association with World Affairs