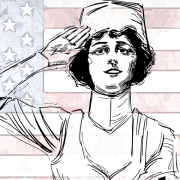 Go To Past Event
from The Hello Girls: America’s First Women Soldiers held on December 11, 2017

The Hello Girls tells the captivating story of America's first women soldiers and their fight for equality. It details how these soldiers helped win World War I and earned women the right to vote.

In 1918, the U.S. Army Signal Corps sent 223 women to France. They were masters of the latest technology: the telephone switchboard. General John Pershing, commander of the American Expeditionary Forces, demanded female “wire experts” when he discovered that inexperienced doughboys were unable to keep him connected with troops under fire. While suffragettes picketed the White House and President Woodrow Wilson struggled to persuade a segregationist Congress to give women of all races the vote, these competent and courageous young women swore the Army oath.

In this program, Elizabeth Cobbs will also reveal how, after serving under fire on the front, the Hello Girls were dismissed without veteran's benefits. They continued to fight hard for equal treatment until their work was finally recognized.