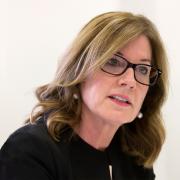 Go To Past Event
from Global Convergence in Digital Privacy? With Elizabeth Denham held on February 10, 2020

Personal data is as important to modern digital businesses as finance and human capital. It is used to record customers’ behavior, predict it and even to manipulate it. But as awareness of these practices grows, is increasing concern among consumers influencing data regulation and regulators on both sides of the Atlantic?

U.K. Information Commissioner Elizabeth Denham gives her perspective on the global trends in data protection and privacy. Denham will discuss the big data cases her office has looked at—including Facebook, WhatsApp and Cambridge Analytica—and reflect on their international influence from her perspective as chair of her global regulatory community. Denham chairs the Global Privacy Assembly, which brings together digital data protection and privacy commissioners from around the world to share knowledge and build stronger cooperation.

Denham will reflect on the recently implemented California Consumer Privacy Act (CCPA) and the impact of growing regulation around data protection and privacy, particularly in Silicon Valley. And crucially, she will talk about her office’s newly launched "children’s code," which sets out standards that digital services should meet to protect children’s privacy.

Denham became the U.K.’s information commissioner in 2016. The Information Commissioner’s Office (ICO) is the U.K.’s regulator for data protection and information rights. It enforces the law, both civil and criminal, against organizations that have violated data protection rules. Denham brings an international dimension to her U.K. role from her previous work as information and privacy commissioner for British Columbia and Canada and assistant privacy commissioner of Canada. She is recognized as one of the most influential people in her field, most recently in Politico’s list of 28 people shaping, shaking and stirring Europe. She also chairs the International Conference of Information Commissioners, which works globally to improve access to information rights.