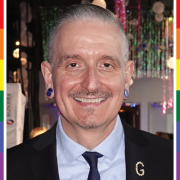 Go To Past Event
from George Ridgely: The Exit Interview held on June 20, 2019

Since 2014, George F. Ridgely, Jr. has been the executive director of San Francisco Pride. Attracting nearly 1 million attendees and participants annually, San Francisco Pride is one of the largest gatherings of the LGBTQ community and its allies in the world. On June 29 and 30, SF Pride will commemorate the 50th anniversary of the Stonewall riots with a 25-block celebration and rally in Civic Center; as well as a massive parade along Market Street, from the Embarcadero to Civic Center, on June 30th.

On June 20, we will interview Ridgely and celebrate his years of work as SF Pride's executive director, a position he is leaving this year.

Before joining San Francisco Pride, George was the director of operations for another iconic San Francisco event, Bay to Breakers, one of the oldest, largest and most unique footraces in the country. During his 11 years with the 12K race, George served as director of marketing before overseeing operations. For the past 16 years, George has also been involved with the Castro Street Fair; serving as their executive director from 2004–2013, and currently serving as treasurer on its board of directors. Castro Street Fair is a community celebration that was founded by Harvey Milk in 1974 and attracts about 40,000 attendees annually.

Born and raised in southern Maryland, George relocated to California in 1988; he has lived and worked in both San Francisco and Los Angeles.