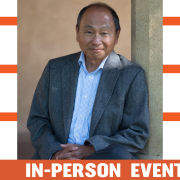 Francis Fukuyama: Liberalism and Its Discontents

Go To Past Event
from Francis Fukuyama: Liberalism and Its Discontents held on May 16, 2022

When noted political scientist Francis Fukuyama predicted the "end of history," it seemed that the Western form of traditional classical liberalism and democracy—rule of law, equal treatment, individualism, and political freedom—was on the march in countries around the world, and that a new political order would be established around the globe. However, as the Russian attack on Ukraine shows, the battle between autocracy and classic liberalism will continue to shape global relations in the present and the future, and as history it will tell the story of this complicated period in world history.

In his latest book Liberalism and Its Discontents, Fukuyama explains the troubled history of the American realization of classical liberalism here in the United States, and the challenges from both sides of the political spectrum arising in recent decades. With the right demanding economic freedom above all else, and the left making its core ideal the elevation of identity above the universality of humanity, Fukuyama argues that both approaches miss the mark in grasping classical liberalism, and the consequences can be disastrous both at home and around the world.

At this critical time, Fukuyama proposes a bold new defense of classical liberalism, and explains that failing to do so will continue to fragment America’s civil society, and will influence global pushback on democracy itself.

Join us as Fukuyama engages in a critical and timely discussion on classical liberalism, why it remains one of the most influential political ideologies of the past millennium, and why battles around it will determine the path of the 21st century for the United States and the world.

and is supported by the Ken & Jaclyn Broad Family Fund.