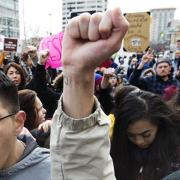 Francis Fukuyama on Identity: How It Separates Us and Can Bring Us Together

Go To Past Event
from Francis Fukuyama on Identity: How It Separates Us and Can Bring Us Together held on October 30, 2018

One of America's leading political scientists and theorists Francis Fukuyama is back with a provocative new look at one of the most critical issues facing America: identity politics and, most specifically, its role in promoting democracy as well as undermining it through polarization.

In 2014, Fukuyama wrote that American institutions were in decay due to the power of powerful interest groups. Two years later, his predictions were borne out by the rise to power of a series of political outsiders whose economic nationalism and authoritarian tendencies threatened to destabilize the entire international order. These populist nationalists seek direct charismatic connection to “the people,” who are usually defined in narrow identity terms that offer an irresistible call to an in-group and exclude large parts of the entire population. At the same time, groups previously marginalized based on race, ethnicity, gender or religion are increasingly demanding equal recognition in society, setting up a clash in identity politics at a time when national unity is so needed.

Fukuyama's new book looks at the contrasting ways identity has become a potent new battleground in society and discusses the threat to society when there are such significant challenges to collective action and communication. His book also makes a spirited call for the importance of forging a national identity that supports democracy as opposed to breaking it apart.

Fukuyama's previous best-selling books, including The End of History and the Last Man and Political Order and Political Decay: From the Industrial Revolution to the Globalization of Democracy, have been essential to understanding America's role in the world and our country's politics and culture. As the country faces another bitterly divided election amidst debates about populism and identity, understanding Fukuyama's new book and viewpoint will be critical no matter what happens in November.

Please join us for this important discussion with one of the country's top political scientists.

Fukuyama will be in conversation with Frederick M. Dolan, professor emeritus of rhetoric at UC Berkeley. Dolan is the author of Allegories of America: Narratives, Metaphysics, Politics and numerous articles on modern political philosophy, aesthetics and interpretation.