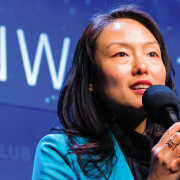 The Exit Interview: Jane Kim on The Michelle Meow Show

Go To Past Event
from The Exit Interview: Jane Kim on The Michelle Meow Show held on February 14, 2019

Jane Kim was a former supervisor for San Francisco's District 6, representing South of Market, Mission Bay, the Tenderloin, Civic Center, Treasure Island and Yerba Buena Island. She is the first Korean-American elected official in San Francisco and the first Asian-American candidate to win a non-historically Asian district in the city.