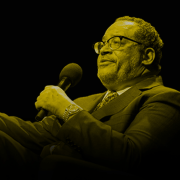 An Evening with Michael Eric Dyson

Go To Past Event
from An Evening with Michael Eric Dyson held on December 12, 2019

This program is part of our Good Lit series, underwritten by the Bernard Osher Foundation

Michael Eric Dyson is known for his many talents. He is an outspoken academic and sociologist, social critic, best-selling author, a popular figure in political news media, an ordained Baptist minister and, in his own words, one of the country’s leading “hip-hop intellectuals.” Often in Dyson’s work, these concepts all intersect to reflect a well-rounded picture of black life in America. Now Dyson has set his analytical sights on someone who, he argues, is one of the greatest American poets of all time: Jay-Z.

Join INFORUM and Dyson for an evening of all things Hova—from Jay-Z’s humble beginnings as a hustler in 1980s New York City to his meteoric rise to fame and his eventual recognition as one of the greatest rappers of all time. Dyson will explore how Jay-Z’s 30-year career has changed not just hip-hop but also the music industry, business, politics and social justice. Join us for an exploration of the life of a great literary figure and learn how he provided the blueprint.