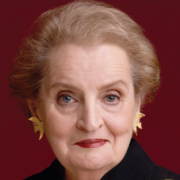 An Evening with Madeleine Albright and Katie Albright

Go To Past Event
from An Evening with Madeleine Albright and Katie Albright held on March 8, 2017

A Generational Conversation on the Challenges Confronting America

Join us on International Women’s Day for a special conversation with former U.S. Secretary of State Madeleine Albright and her daughter, Katie Albright, attorney and executive director of the San Francisco Child Abuse Prevention Center. In the divided America of 2017—with issues of immigration, civil rights, gender equality, the role of government domestically and the place of the U.S. in the world at stake—come hear a wide-ranging dialogue with two prominent Americans on the greatest challenges facing all of us and the possible solutions to these challenges.

In conversation with Ellen Tauscher