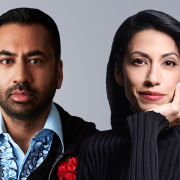 Go To Past Event
from An Evening with Kal Penn and Huma Abedin held on November 9, 2021

Kal Penn and Huma Abedin had vastly different journeys into the world of American politics. As a collegiate-level White House intern during Hillary Clinton’s time as the first lady, Abedin never predicted she’d go on to witness some of the most crucial moments in America’s modern political history; including Clinton’s watershed nomination as the first female candidate for president. Penn, too, has both witnessed and shaped political history as a liaison for the Obama administration—something that he, a prominent Hollywood actor who’d experienced countless discriminations in the entertainment industry, never saw coming.

While their foray into politics were poles apart, Abedin and Penn do share a similar vision of the American Dream molded by their immigrant families. In their own professional endeavors—from Penn’s shift to politics to Abedin’s powerful tenure as Hillary Clinton’s right-hand woman—they’ve done more than just manifest this dream. Instead, they’ve disrupted it’s very core.

Together at INFORUM, Huma Abedin and Kal Penn will bring to life the remarkable experiences they’ve detailed in their new memoirs, Both/And and You Can’t Be Serious, respectively. In doing so, they will provide the audience with more than just powerful insights toward the meaning of the American Dream—instead, they’ll challenge its “one size fits all” narrative in order to reconstruct its meaning for a more inclusive future.

In response to the COVID-19 pandemic, we are currently hosting all of our live programming via YouTube live stream. This program was recorded via video conference on November 9th, 2021 by the Commonwealth Club of California.