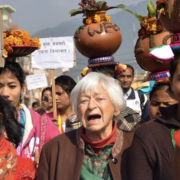 Go To Past Event
from Ending Child Marriage in Nepal held on July 28, 2021

Every two seconds a girl is married against her will.

COVID-19 exacerbated this already massive problem, reversing many gains that had been made in the past decade as schools closed and millions of girls lost their one chance at freedom—an education.

Join us for a conversation with three women working to end child marriage. Through their stories, you will hear more about the critical importance of girls’ freedom for families and communities worldwide, and what you can do to help end this unjust and inequitable practice.

Sangeeta Lama is an independent Nepali journalist with more than 20 years’ experience in the field. Sangeeta has provided invaluable support to international publications such as National Geographic and The New York Times and has collaborated with Stephanie Sinclair / Too Young to Wed to support families in Kagati village since 2006. She is a board member of Working Women Journalists, an organization committed to strengthening the capacity of female journalists and the role of women in Nepali media. Sangeeta has a special interest in gender and the issues faced by marginalized people. She is the senior vice chair of Sankalpa-Women’s Alliance for Peace Justice and Democracy, an organization committed to strengthening women's rights in Nepal.

Stephanie Sinclair is the founding executive director of Too Young to Wed, a nonprofit dedicated to abolishing child marriage. Stephanie is a Pulitzer Prize-winning journalist known for gaining unique access to the most sensitive gender and human rights issues around the world; she regularly publishes in esteemed outlets, including National Geographic and The New York Times Magazine. Through her work, Stephanie portrays the lives of vulnerable girls subjected to practices such as child marriage, genital mutilation and acid attacks, with dignity, depth and empathy. Her ongoing 15-year series, “Too Young to Wed,” delves into how child marriage has altered the fate of tens of thousands of young girls.

Olga Murray is the founder and honorary president of the Nepal Youth Foundation. Born in 1925 in Transylvania, Murray immigrated with her parents and in 1954, became one of the first women to graduate with a law degree from George Washington University. During her 37-year tenure at the California Supreme Court, Murray helped write important decisions in the areas of civil rights, women’s rights and environmental policy. In 1990, she founded the Nepal Youth Foundation to help provide health, shelter, education, and freedom to children and families in Nepal. Her foundation helped to eradicated the inhumane practice of indenturing little girls as kitchen servants.

Lori Barra is the executive director of The Isabel Allende Foundation, a private family foundation, whose mission is to invest in the power of women and girls to secure reproductive rights, economic independence and freedom from violence. Prior to leading the foundation, Lori designed books and magazines in New York and Tokyo and worked for Apple as an art director.

Renee Saedi has a deep-rooted passion for social justice, especially human rights and equity for women and girls. She currently serves as the Champions for Equality program manager at Global Fund for Women, where she has worked for more than 9 years. As a feminist fund, Global Fund for Women strengthens gender justice movements to shift power, privilege, and perception and create meaningful change by offering flexible support to a diverse group of partners—more than 5,000 groups across 175 countries so far. Renee works closely with a cohort of philanthropists each year, leading programming on feminist philanthropy and partnering with grassroots activists in an immersive learning and travel opportunity, Champions for Equality.

In response to the COVID-19 pandemic, we are currently hosting all of our live programming via YouTube live stream. This program was recorded via video conference on July 28th, 2021 by the Commonwealth Club of California.

Founding Director, Too Young to Wed