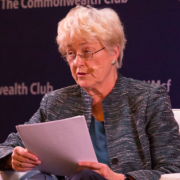 Go To Past Event
from EMILY’s List and Electing Pro-Choice Women: Ellen R. Malcolm in Conversation with Christine Bronstein held on March 15, 2016

Christine Bronstein, Founder, Nothing But the Truth Publishing; Author; Mother—Moderator

In 1985 Ellen R. Malcolm launched EMILY’s List, which has grown into a powerhouse political organization over three million members strong, focused on creating change by electing pro-choice women to office. When EMILY’s List began, there were only 12 Democratic women in the House and none in the Senate; today, EMILY’s List has played a vital role in helping to elect 19 female senators, 11 governors and 110 Democratic women to the House. Malcolm's new book, When Women Win: EMILY's List and the Rise of Women in American Politics, includes interviews with some of today’s most celebrated Democratic female politicians, including Hillary Clinton, Nancy Pelosi, Tammy Baldwin and others. The book also recounts some of the most daunting political challenges for Democratic female candidates over the past three decades, including the historic election of Barbara Mikulski as the first female Democratic U.S. senator elected in her own right, the defeat of Todd Akin by Claire McCaskill, and Elizabeth Warren’s hard-fought victory over Scott Brown. Join us for a lively discussion with Ellen R. Malcolm about the evolution of EMILY’s List, the brave women who have successfully navigated our nation’s tough political landscape and what the future holds for women in politics.