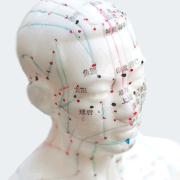 Electroacupuncture for the Treatment of Neurodegenerative Diseases

Go To Past Event
from Electroacupuncture for the Treatment of Neurodegenerative Diseases held on August 19, 2019

This event is the latest in our member-led forums’ Art and Science of Well-Being series.

The World Health Organization states that neurological disorders are one of the greatest threats to public health today. Seventy-six million aging baby boomers, or 29 percent of the population in the United States, are about to push Alzheimer's disease rates sky high. Acupuncture, a form of traditional Chinese medicine, has been proven safe and effective in treating a wide variety of common ailments and problems. Acupuncture can also help treat Alzheimer's and other neurological diseases.

This talk will discuss electroacupuncture, where a small electric current is passed between pairs of acupuncture needles. Electroacupuncture targets specific receptors to stimulate neuropeptide release for cerebral rehabilitation and neural synaptic repair. John Nieters will explain how this type of acupuncture works in the treatment of these four top neurological diseases: Alzheimer’s disease/dementia, Amyotrophic lateral sclerosis (ALS), Motor Neuron Disease, Parkinson’s and Multiple Sclerosis. Nieters will further explain how electroacupuncture correlates to traditional Chinese medicine. Join us for this opportunity to hear Nieters, an experienced American practitioner of traditional Chinese medicine.